Bachelors in Textiles selected at the Paris Déco Off - Ecole Conte

Bachelors in Textiles selected at the Paris Déco Off

Paris Déco Off is a high-profile gathering of publishers and designers in the international decoration industry, and a student competition was organised for the fifth consecutive year for the event.

‘Design me a fabric or wallpaper’

The challenge this year: to come up with a unique motif based on a country, an ethnic race or a natural marine or terrestrial site.

The competition is organised in partnership with Decofinder and is judged by a panel of renowned professionals in the design and decoration industry, as well as journalists from various media outlets. This is a fantastic opportunity to unearth new talent – including 5 Bachelors Fashion and Textile Design students from Ecole Conte!

Projects by Xiaolin He, Yukako Itoh, Marie Mercier, Salini Narayanan Nair and Manon Rey will be exhibited at the Hotel Drouot during the Paris Déco Off event running from January 17th to 21st. The prizes themselves will be awarded at the event on Friday 18th January.

Among the projects selected is one by Xiaolin He, who has chosen the theme Memorial Voyage and takes his inspiration from Chinese tradition. Using door motifs, the student has sought to foreground notions of time and memory: “doors serve to protect and cherish certain things. As well as that, they also separate and condemn.” The motif is associated with the symbolism of the dog (2018 having been the Year of the Dog in China), which completes this home-related harmony.

Salini Narayanan Nair has elected to explore the well-known theme of Pandora’s Box. With her fantastical motifs – fictional and strange – ranging from dragons to sirens, the student plunges the viewer into the world of traditional myths sublimated by colours that are fresh, contrasting and very much of the moment.

Explore the Ms Luxury and Fashion...

Immersion days at the Ecole Conte 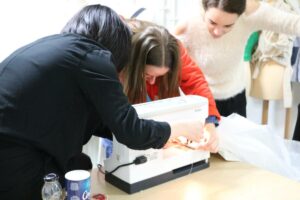 The Ecole Conte has become a real reference for professionals in the fields of fashion, textiles and luxury.

This website uses cookies to improve your experience while you navigate through the website. Out of these, the cookies that are categorized as necessary are stored on your browser as they are essential for the working of basic functionalities of the website. We also use third-party cookies that help us analyze and understand how you use this website. These cookies will be stored in your browser only with your consent. You also have the option to opt-out of these cookies. But opting out of some of these cookies may affect your browsing experience.
SAVE & ACCEPT